Back in 2014, I was listening to a podcast by Srinivas Rao called “The Unmistakable Creative” where in one particular episode he interviewed a very intriguing and captivating individual. The gentleman in the interview said something that caught my attention and changed my life forever!

He said, “one day when your life flashes before your eyes, will you fall asleep?“. In other words, did you live a life of impact, excitement, challenges, and memories or will you be bored by what you see when you die?! So when that revelation came to him, he started consciously doing one exciting thing a year, something that would make him look back on his life and smile with gratitude and fulfillment.

After listening to this episode, that is when I decided that I too would do something every year that would challenge & change my life; something out of my comfort zone; something that when one day my life flashes before my eyes, there would be NO regrets!

2015: On The Shoulders Of Giants Podcast

As a podcast junkie, whether I am idling at home or driving on the highway, I am usually listening to a podcast episode. I had always desired to host and produce my own podcast, but never had the courage … until now!

When I launched my first episode, I registered 30 unique downloads (probably all friends and family who took pity on me). By the time I recorded my last episode, I had an average of around 4,000 downloads per episode!!!! It wasn’t enough to get me a podcast of the year award, but the pride I got from this work is almost unparalleled to anything else I’ve ever done.  I had a loyal listener base with subscribers as far away as Japan, South Africa, the UK and Texas (the TX downloads were definitely my parents and my siblings).

You can read more about the my podcast on this page of my website: Podcast Overview

A few of my favorite podcasts that I would personally recommend are:

I’ve always had an entrepreneurial mind: my grandfather on my mother’s side was a businessman; he owned a bakery in Chihota, an area about 40 km west of Marondera and 90 km south of Harare. Many of his children grew up to own their own businesses, including my mother who did so many projects to earn extra money for the family including sewing woolen sweaters (jerseys), sewing comforters (duvets), making meals for road & construction crews, and cleaning offices & municipal busses. Some of these businesses thrived, others were one off but all generated revenue that was a vital source of supplemental income for the family.  I have witnessed and experienced first hand the value of not relying on a 9-5 job and building something that you can call your own.

They say “fail fast, fail often,” … Thomas Edison, apparently, “failed” 9,000 times before he was successful with his light bulb invention. I’ve attempted starting a few businesses of my own; failed in each one, without ever really succeeding in the “fast” part: but this venture I started in 2016 has been the most focused and viable business yet.

So, in 2016, I took the plunge to start on a transportation business born out of a couple of ideas I had been tossing around in my head. The premise of the business idea was to take advantage of the thriving brewery industry in Burlington and provide people with the opportunity enjoy shared time with their friends while enjoying the brewery scene but without the challenges of drinking and driving. 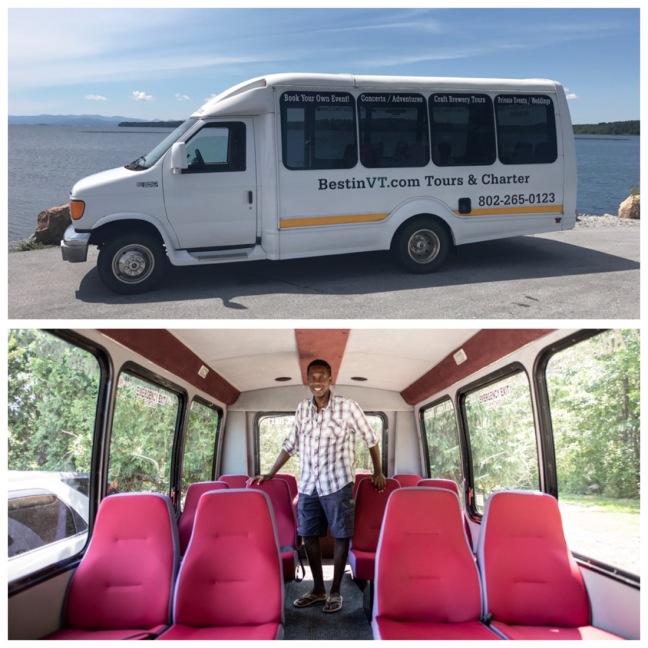 Outside of acting as the 2nd Wise Man in my kindergarten production of the Nativity Play (and according to my mom, I walked onto the scene while Mary was still on the donkey!!!), I did not have any professional acting experience, and so when a good friend of mine approached me and asked if I would like to audition in a play, my initial reaction was “hell no!”. However, it was well into the summer of 2017 and I had not found what my one “crazy” adventure was going to be, and with the encouragement of my daughter, I decided to audition and lo and behold, I got the part of Alemu in the play “The Call”.

Below is a brief write up of the plot of the play.

“The Call” by Tanya Barfield
Directed by Cristina Alicea

After struggling to conceive to have a baby in natural and less conventional ways, Annie and Peter decide to adopt, setting their sights on a child from Africa. But, when they receive surprising news from the adoption agency, their marriage is put to the test, secrets of the past are exposed, and this couple approaching midlife is left with an unexpected choice.

As a child, my 3rd Grade teacher once referred to me as “the class clown” and tied me to my chair once so that I wouldn’t be able to move or act a fool.  The Class Clown was over time beaten out of me by a combination of teachers, principals and my parents. But don’t mistake my laid back demeanor as being a passive individual, because if you get to truly know me, you’ll soon find out that the Class Clown lives and makes quite regular appearances in front of trusted individuals.

After having got the unique opportunity of being invited as a guest of The Daily Grind Show hosted by The Vermont Comedy Club, the urge to unleash the Clown became irresistible. I decided to sign up for a standup comedy class with The Vermont Comedy Club (VTCC) – a dream I had always wanted to fulfill, but never had the cajones to actually try to be funny to people that weren’t my family or friends.

After a 6 week course, I was finally ready to perform my Standup routine at the VTCC.

Without bragging, my standup was a hit! People asked if I had done this before (and of course I had, the Class Clown has been a comedian in training for decades!).

Back in 2015, I was mentoring a young man who was completing university studies. What I realized through this experience was that this young man, like many young People of Color was severely lacking in experiential and early career experiences. I started thinking to myself … how can someone like me, help more people like my mentee and in the process build a community and network that promotes, supports, and affirms People of Color in a way that helps them succeed professionally. If this kid was White, he probably would have got guidance & support from a myriad of sources and people, but this luxury is not always available to many People of Color – whether they are starting out a career or even in the middle of their career. This was the genesis of how the Vermont Professionals of Color Network (VT PoC) was started.

From that point on I started exploring how I could make a difference in people’s professional lives, and that is when I met my other 2 co-founders (Phet Keomanyvanh and Weiwei Wang) who were on the same journey that I was.

Initially, the VT PoC Network was just a networking group, we threw a couple of events together and had resounding success at attracting professionals of color to our events. The most common reaction was “wow, I never knew there were this many professionals of color in Burlington” and “wow, why have we not done this sort of thing in the past”.

Fast forward to the COVID pandemic of 2020, and that is when our organization really found its feet. Despite only meeting as an organization once (in February of 2020), the lockdown actually forced us to take a step back, create a Board, come up with a vision and a mission, draft an operating agreement and finally register the organization as a 501 (c)(3).

As of the start of 2021, we have over 500 registered members and a several thousand social media followers. In the Summer of 2021, we received the Keys to The City of Burlington for the work we did forming the Vermont Health Equity Initiative, which saw over 3,500 BIPOC get vaccinated at our BIPOC COVID Vaccination Clinics.